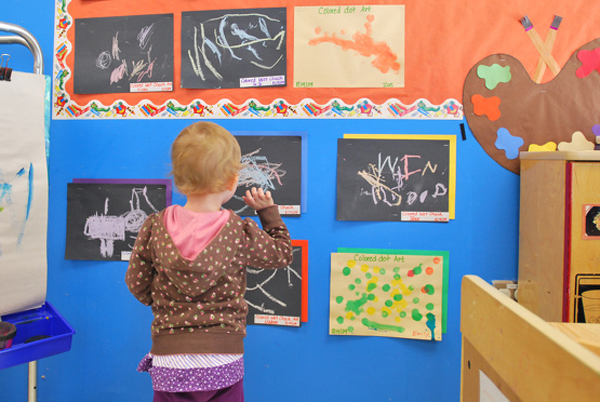 According to Yazejian, Educare classrooms offered the chance to study children enrolled in high-quality early education and care from the earliest ages. Educare is an enhanced Early Head Start and Head Start program for low-income, high-needs children from 6 weeks old until entry into kindergarten. The model has been replicated in 20 schools nationwide over the last 15 years.

“Educare’s comprehensive approach to early childhood education aims to level the playing field for children living in poverty,” said Portia Kennel, executive director of the Educare Learning Network. “This new study confirms that we need to include the earliest years of life as part of our nation’s education system. Quality early education prepares vulnerable children for success by preventing the achievement gap that appears long before kindergarten.”

“Teachers model the use of language,” she added. “And overall instructional quality is high.”

Many people traditionally have viewed early care for infants primarily as a support for mothers who want to work and not as an essential component of early schooling. However, findings from the FPG study add to a growing body of research revealing better outcomes for children from low-income families who start high-quality education earlier and stay in it longer.

“Entering Educare as an infant appears to prevent the early decline in language scores often associated with poverty,” said Yazejian. “In addition, the children who enter Educare schools as infants and remain through their preschool years demonstrate the highest English language scores at age 5, performing very close to the national average.”

“Most dual-language learners in this study were in classrooms where English was the primary instructional language but in which one staff member could use their home language as needed to support learning,” Yazejian explained. “It’s not surprising our findings show they quickly acquired skills in English.”

Earlier research has shown the English language skills that dual-language learners develop prior to kindergarten can predict educational achievement through eighth grade, but keeping skills in the home language also is beneficial. Home language skills are related to long-term social, emotional, cognitive, and academic outcomes.

“That’s why it’s reassuring that our study found that the acquisition of English language skills in Educare classrooms does not come at the expense of Spanish skills,” said Yazejian.

The number of young children who speak a language other than English at home is growing, and this study contributes valuable new information to the field, Kennel said. “It’s encouraging to see that dual-language learners are making strides that form the critical foundation for later learning,” she explained.

Yazejian agreed that more than one year of high quality early care and education brings greater benefits for children. “The differences we found in this study, extrapolated to thousands of children—especially dual-language learners—could add up to lasting effects and lower public education costs.”

FPG grants permission to publish this story in whole or in part, as well as to use the above photo in conjunction with this story. Photo credit: UNC's Frank Porter Graham Child Development Institute Photo Archives.