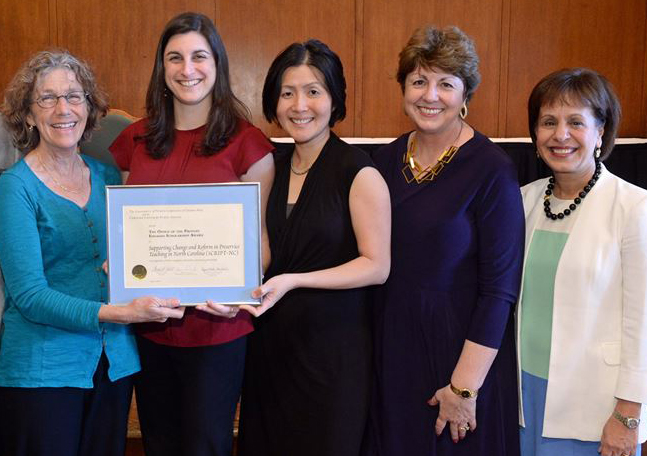 The 2014 Office of the Provost Engaged Scholarship Award goes to Supporting Change and Reform in Preservice Teaching in North Carolina (SCRIPT-NC). The FPG project partners with community college programs across North Carolina to better prepare early childhood educators to meet the needs of young children with disabilities and children who are culturally and linguistically diverse.

One of SCRIPT-NC’s key partnerships is with the early childhood education department at Vance-Granville Community College, which is offering a cutting-edge program for the next generation of teachers who will serve young children.

“It’s been a real eye opener,” said Tracey Bennett, who has taught at VGCC for ten years and serves as department chair. “We had a good program already at Vance-Granville, but with SCRIPT-NC we realized what we really wanted to be.”

Not only did SCRIPT-NC help Bennett and her faculty to enrich the content of their courses with the latest evidence-based research, the partnership also led her department to examine its role in the community. “We realized that programs in our area are serving a lot of young children whose families’ first language isn’t English—or they don’t speak English at all,” said Bennett. “These programs also serve children with different kinds of abilities.”

Early in the partnership, SCRIPT-NC’s team organized a retreat that brought together the community’s program directors, the VGCC department’s alumni, Bennett’s early education faculty, and other stakeholders. “The retreat really sharpened our perspectives,” said Bennett. After the retreat, her department focused on developing early childhood educators who are best equipped to work for local programs.

With the benefit of SCRIPT-NC’s expertise and evidence-based resources, Bennett and her department began revising and “tweaking” courses. In a practicum course, Bennett’s new approach elicited much deeper material from her students. “They’re learning to look at what’s best for each child developmentally now,” she said. “They can identify areas for growth, while looking at the whole cultural context.”

One of SCRIPT-NC’s key objectives is to help future early childhood educators in North Carolina become more knowledgeable and comfortable working with young children from diverse backgrounds, and Bennett anticipated a crucial shift in how her department’s students will interact with children and families.