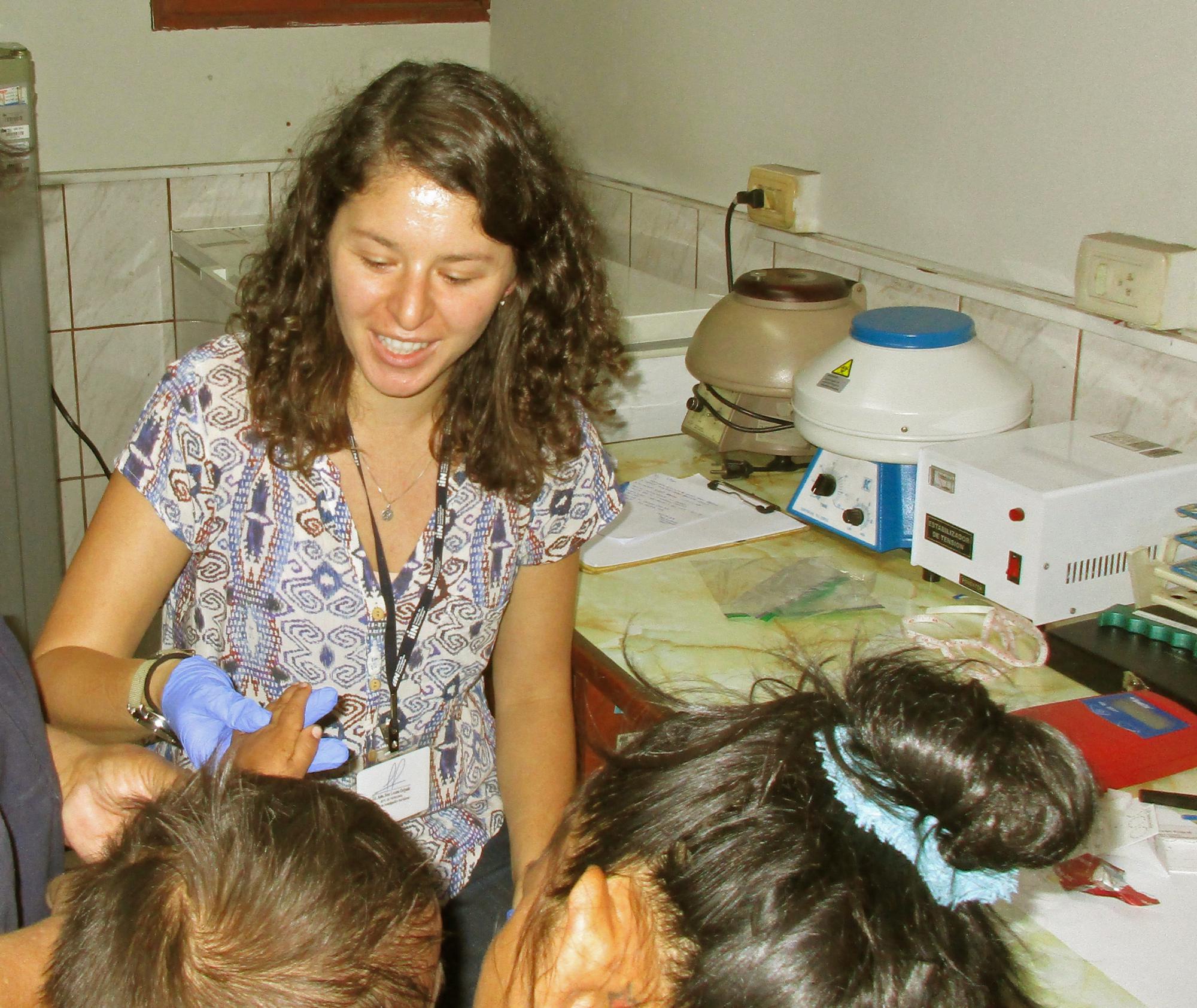 During her initial pre-dissertation fieldwork in Lima, Achsah Dorsey met with a number of women about their primary health concerns. “Every person I spoke to wanted to know more about anemia and its effect on their children,” she said.

With support from FPG’s James J. Gallagher Dissertation Award, Dorsey (right) is helping to solve the critical health issue in Peru, where iron deficiency has continued to thwart a massive international effort to improve the nutrition of children and adolescents.

Dorsey said that in the early 2000s the Peruvian Ministry of Health launched two initiatives to reduce widespread anemia by supplying iron-fortified nutrients to children. Since 2010, the Peruvian state, the World Food Program, and the United Nations Children’s Fund have distributed dietary supplements in coastal, highland, and Amazonian regions of Peru.

“Despite these interventions, iron deficiency and anemia remain a critical health problem,” said Dorsey, a Ph.D. candidate in the Department of Anthropology at UNC.

Anemia results from an inadequate number of red blood cells. The condition brings many side effects, including fatigue, rapid heartbeat, dizziness, and leg cramps, as well as potentially severe, long-term complications for children.

She pointed in particular to the San Juan de Lurigancho district of Lima. According to Ministerio de Salud, over the course of a single year the percentage of children diagnosed with anemia rose more than 6% to nearly 42% within that district alone.

According to Dorsey, prior research suggests that iron deficiency remains widespread in areas where there is exposure to harmful pathogens.

“For people living in environments with high levels of infectious disease, restricted iron intake may actually protect against infection,” she explained. “As a result, iron supplementation in areas with high rates of infectious disease, like the migrant communities found in the San Juan de Lurigancho district, may not have an effect on iron level.”

To determine if this is why iron supplementation isn’t lessening anemia in San Juan de Lurigancho, Dorsey is studying families in the Canto Grande community within the district, using public census data and going door-to-door to homes that have children ages 2 to 5. She invites mothers and children to a local health center, where she and a research assistant interview the family and test the child for anemia. She then continues to follow children who are anemic through three more interview sessions over several months.

“I’ve received a positive response from families,” she said. “Caretakers are interested in whether their child has anemia and often ask if I can test them—and their other children.”

Her interviews will provide insights about interactions between home environments and the response or non-response to child iron supplementation. She also will explore if and how dietary patterns affect response to iron supplementation, even investigating each child’s gut microbiome—relying in part on relationships she has built with collaborators at the private Instituto Investigación Nutricional.

“The data will provide both biological and environmental explanations for why Peruvian policies targeting iron deficiency and anemia have not been successful,” said Dorsey. “This research will make national iron supplementation policies and initiatives more effective by creating a framework that can be used to establish the ideal time to introduce iron supplementation.”

Dorsey is the fifteenth winner of the James J. Gallagher Dissertation Award, which honors the late Jim Gallagher, director of the Frank Porter Graham Child Development Institute from 1970 to 1987. Gallagher devoted his lengthy career to advancing policy and practice in support of children and families. The annual award provides support for dissertation research that focuses on issues related to child development and family support.

“Creating and conducting a dissertation project abroad with an institute where UNC does not have an established research relationship has been incredibly challenging and rewarding,” said Dorsey. “It has taught me the importance of being flexible.”

She cited an array of obstacles along the way, including communication breakdowns, cultural mishaps, and equipment malfunctions.

“I’m collecting data on how bodies adapt,” she said. “I’ve also learned how I adapt—and overcome.”

At the conclusion of her study, Dorsey plans to present her results to the Canto Grande community at the local health clinic, as well as to inform national health agencies of the broader relationships between iron, biology, and the environment.

“This has the potential to influence iron supplementation policies and programs throughout Peru,” she said. “And around the world.”

Make a secure gift online to the James J. Gallagher Dissertation Award fund through the Invest in Carolina website.