Skip to main content
Home » News » JFK, LBJ, and FPG: Soil and Seeds for a New Center for Children

JFK, LBJ, and FPG: Soil and Seeds for a New Center for Children

As part of our continuing celebration of FPG's 50th anniversary, this story chronicles FPG's early growth from the seeds John F. Kennedy planted the month before he was assassinated. 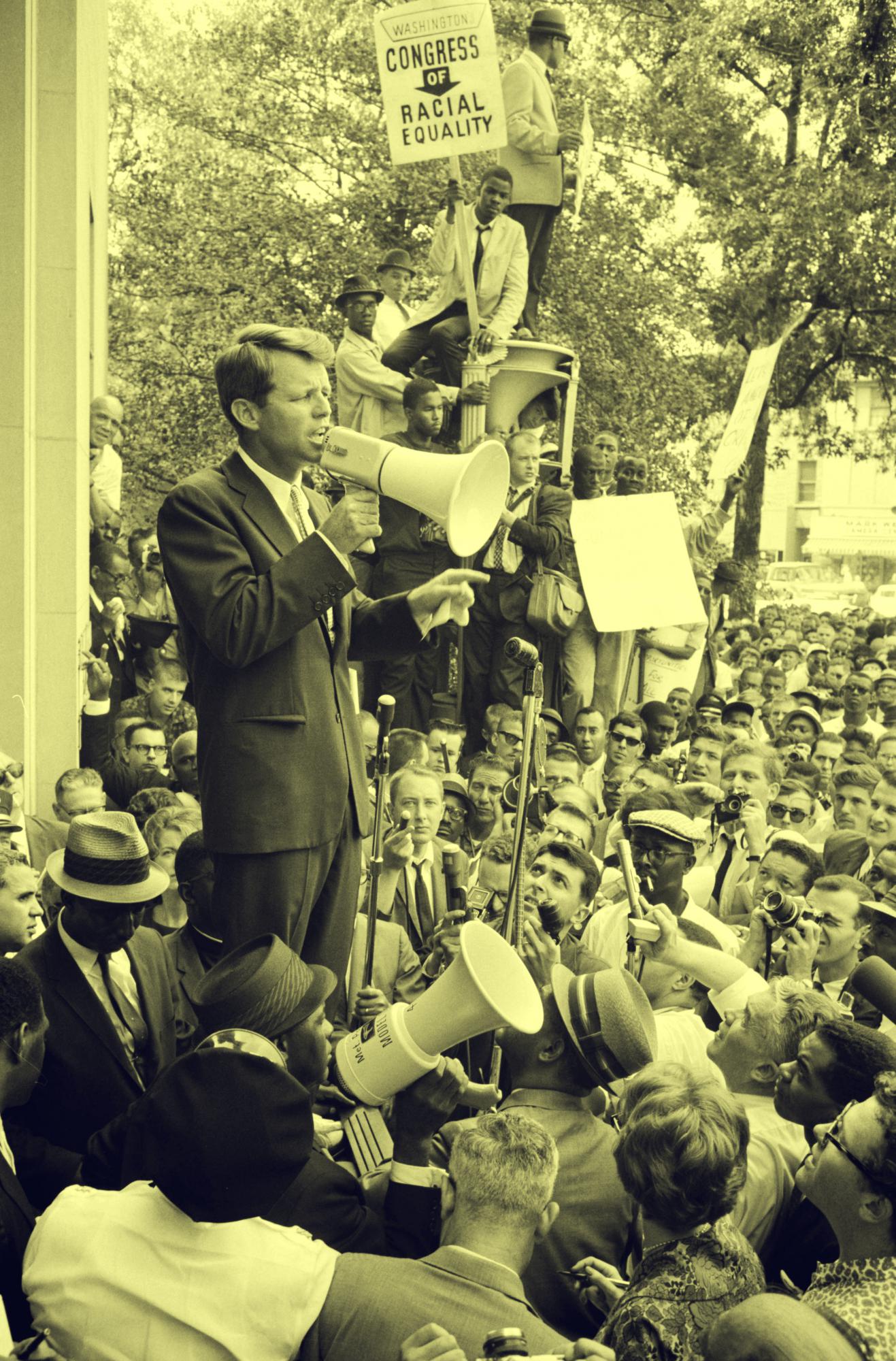 The idea for the Frank Porter Graham Child Development Institute grew out of the turbulent soil of the 1960s—out of iconic frame-by-frame images of a president’s killing in slow-motion, yet also images of his brother (left) on Justice Department steps with a bullhorn in hand, calling for racial justice.

The decade demanded social progress. African Americans marched on Washington after integrated groups of demonstrators participated in Freedom Rides across the South. Congress legitimized the ideal of equality with the Equal Pay Act, the Civil Rights Act, voting rights legislation, and immigration reforms. President Lyndon B. Johnson declared war on poverty, and, on behalf of children in poverty, Head Start was born. Illinois set a progressive precedent for homosexual rights at the state level by abolishing laws proscribing gay sex. Betty Friedan and colleagues founded The National Organization for Women to work for the end of gender discrimination. Disability rights advocates began challenging the status quo of care in institutions and asylums, including Burton Blatt and Fred Kaplan’s release of Christmas in Purgatory, A Photographic Essay on Mental Retardation, which exposed the horrific treatment of people with mental illness and intellectual disabilities.

Awareness and change, however, often were coupled with violence in the 1960s. By the time of FPG’s founding in 1966, President John F. Kennedy and Malcolm X already had been assassinated, the U.S. had committed 200,000 troops to Viet Nam, and much of the decade’s most chilling violence had yet to come. Assassins also would gun down Robert Kennedy and Martin Luther King. The New York City Police Department would set off an infamous four-day riot by raiding a gay bar called the Stonewall Inn. U.S. officials would tout victories in Viet Nam by comparing body counts, sending escalating numbers of troop overseas, and instituting the draft—and draft cards would burn. The 1960s was a decade of great tragedy that nonetheless provided a context that nourished lasting, organized commitments on behalf of peace, the poor, women, gays and lesbians, people of color, people with disabilities, and children.

John F. Kennedy (right) planted the seeds for the Frank Porter Graham Child Development Institute in key federal legislation he had signed into law the month before he was assassinated. Kennedy’s sister Rosemary had intellectual disabilities, which in large part—along with his sister Eunice’s encouragement—compelled him early in 1963 to challenge Congress to significantly address mental illness and mental health by establishing interdisciplinary research centers that could profit from “the talents of our best minds.” 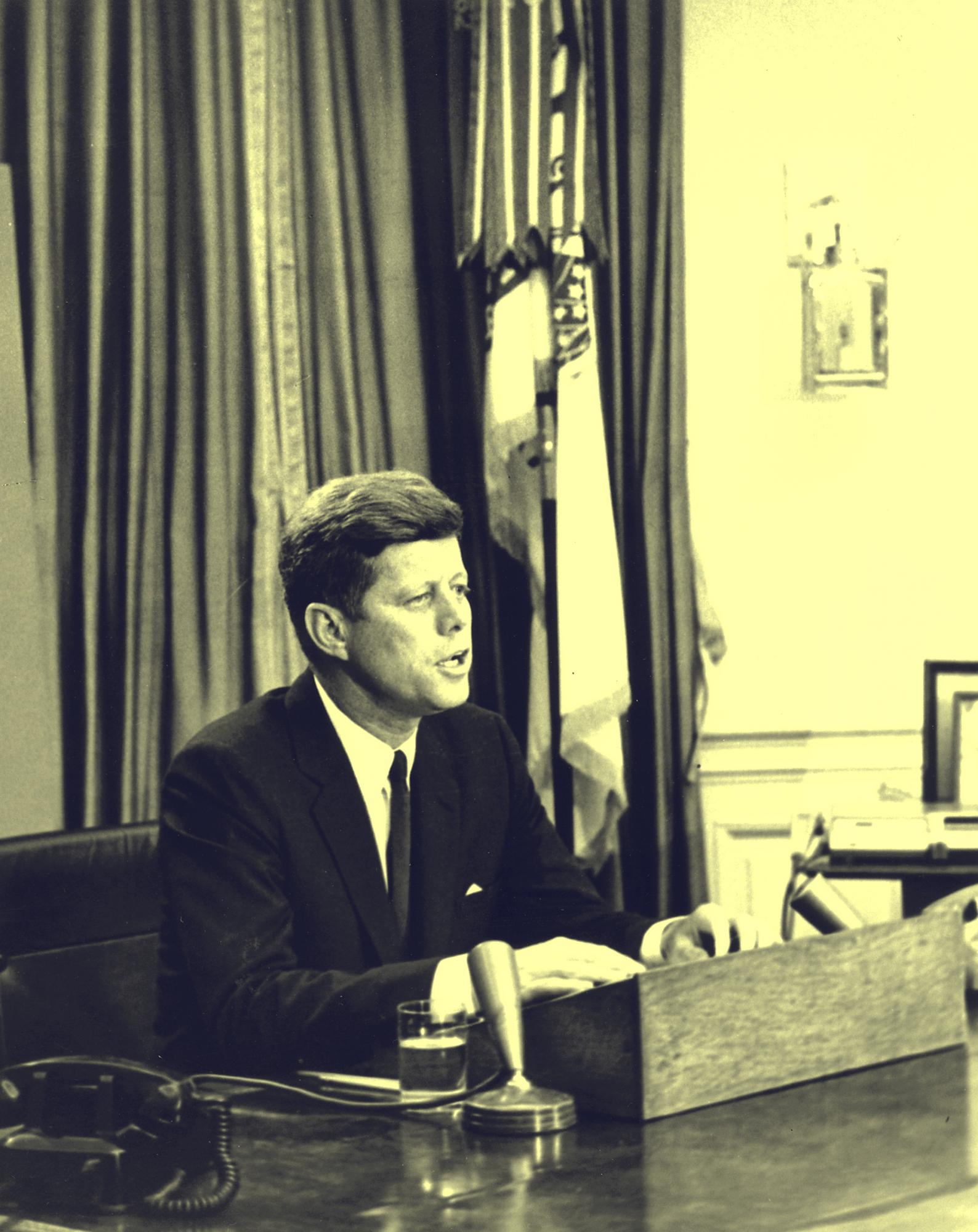 Not only did the subsequent Mental Retardation Facilities and Community Mental Health Centers Construction Act authorize funding for developmental research centers in university-affiliated facilities, the law also specifically included provisions that supported universities in the construction of research centers. With Kennedy’s assassination the following month, the Act marked the end of his planning for America’s “New Frontier”—but the legislation’s crucial, germinating effects would long outlive its biggest advocate.

After Lyndon Johnson succeeded Kennedy, new programs and policies originating from the White House fueled Johnson’s move to a “Great Society,” through which he fostered efforts to reduce inequalities in wealth, health, and education. Johnson signed Medicare and Medicaid into law, and when his “War on Poverty” zeroed in on the plight of children, the 1965 launch of Head Start began more than 50 years of federal funding for early education for children from low income families.

In this climate, researchers also had begun to consider how early education could affect the trajectories of young children in poverty. In fact, it was the seminal question for husband and wife Hal and Nancy Robinson, psychologists at the University of North Carolina at Chapel Hill.

“It was wonderful to be living in a liberal community in the middle of the South, because it was a time of the civil rights movement,” Nancy Robinson remarked years later. “There was a hopefulness about what could happen economically to our society and with inclusion of everybody, and that was very exciting and made a big difference in what we did there. The other movement at the same time was, of course, in ‘mental retardation.’” And, thanks to Kennedy’s pivotal legislation and the federal political context, “There was money.”

Nancy and Hal Robinson (here) and close colleagues at UNC proposed building a center on “retardation” that would include both behavioral and biological components. Early planners included members of the Chapel Hill School Board, School Superintendent Howard Thompson, and UNC’s Thelma Thurstone, Harriet Rheingold, and Ann Peters. 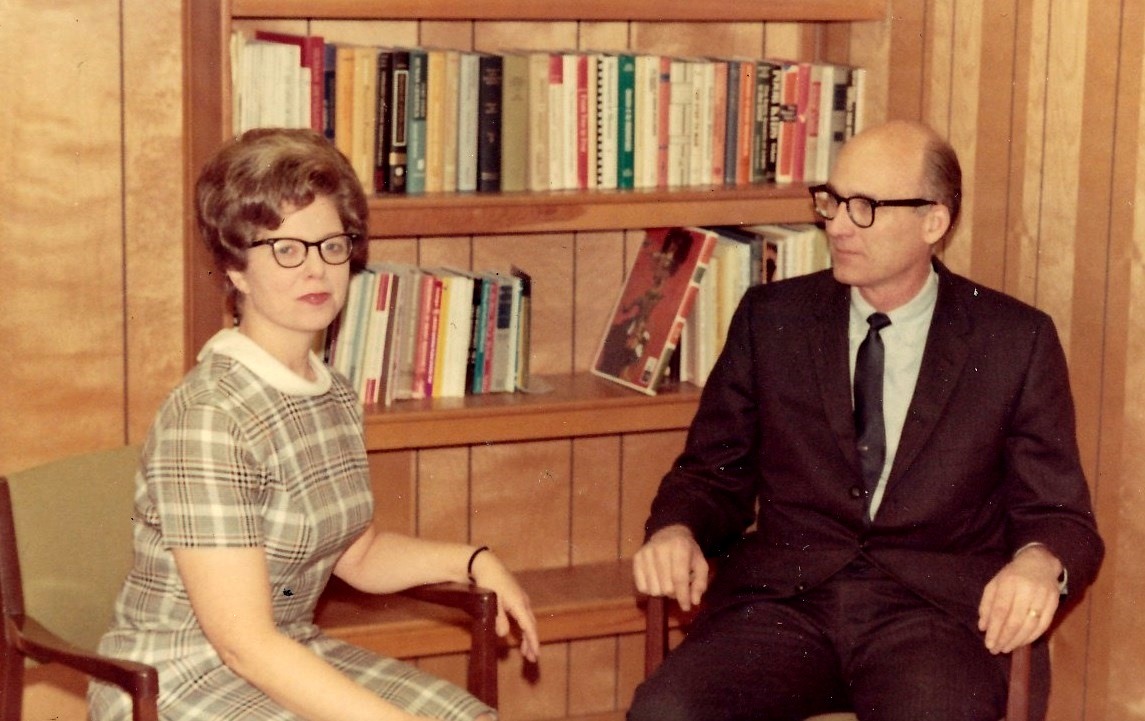 The Robinsons would become FPG’s co-founders—and Hal its first director—when the National Institutes of Health awarded 12 grants to establish research centers across the nation to study and treat “mental retardation.”

FPG (“Frank Porter Graham Child Development Center” in its early years) was the sole center focusing on prevention—especially the prevention of problems resulting from childhood poverty. Nancy Robinson explained the connection between inadequate environmental conditions and intellectual deficits in children, a link few people were making. “The war on poverty and the war on ‘mental retardation’ were going on side by side,” she said, “but nobody was saying they were the same one.”

The husband-and-wife team had planned to establish a model child care center that offered comprehensive services to a small number of infants and toddlers, a place where scientists also could study their learning and development. The Robinsons and their small group of scientists wanted to determine to what extent high-quality child care could impact intellectual deficits in young children from at-risk families. They also wanted to explore the effects of group care for infants, as well as how children from different backgrounds could share the same settings.

“In the 1960s, there was talk about the ‘cycle of poverty’ and how generation after generation had problems in school and life,” said Joseph Sparling, who came to FPG in 1967. He subsequently co-created the curriculum for the most famous study in early childhood education and care, FPG’s Abecedarian Project. “There was a sense of concern, because of the Civil Rights Movement, that there needed to be more equity in society and that universities needed to respond,” Sparling said. 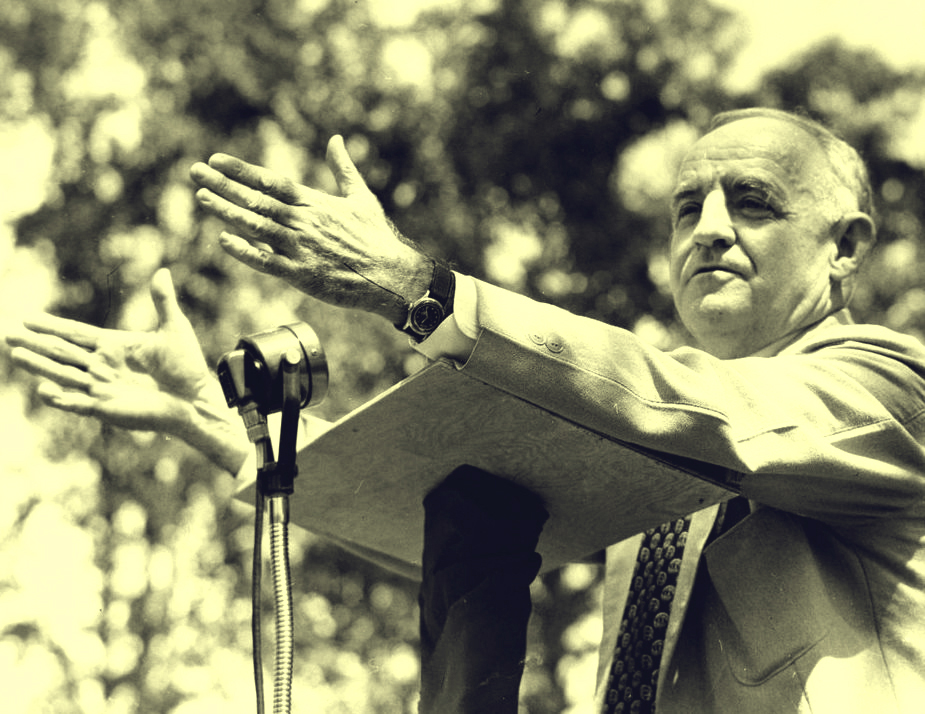 “Educators and psychologists saw a social role for themselves. Until then, they primarily viewed their role as creating knowledge.

There was a sweeping vision that we were not only going to do research in the field of ‘mental retardation’ but also to produce a program that had practical value to society.”

And why had the Robinsons chosen Frank Porter Graham as the namesake that would embody such extraordinary goals?

Some consider Graham (right) to be the most renowned southern progressive of his time for promoting public education and for advocating on behalf of the less fortunate. From 1930 to 1949, he served as president of the University of North Carolina at Chapel Hill. At Franklin Delano Roosevelt’s request, he chaired the president’s National Advisory Council on Social Security. Later in his career at UNC, Harry S. Truman named him to the President’s Committee on Civil Rights, and NorthCarolina’s governor appointed Graham to replace a U.S. Senator from the state who had died after taking office. Afterward, Graham flourished throughout a tenure spanning two decades as a diplomatic mediator and representative for the United Nations. More than 20 colleges and universities recognized him with honorary degrees, which comprise only a portion of his awards. In Chapel Hill, his portrait adorns the Morehead Planetarium, the UNC General Administration Building, and the university’s Frank Porter Graham Student Union.

Stories about his character and belief in equity pervade campus lore, such as when Graham had grappled with the dean of UNC’s Medical School over admission of a Jewish student in 1933. During the dean’s tenure, he had instituted a cap for Jewish students, allowing in only four out of the incoming class’s 40 students. 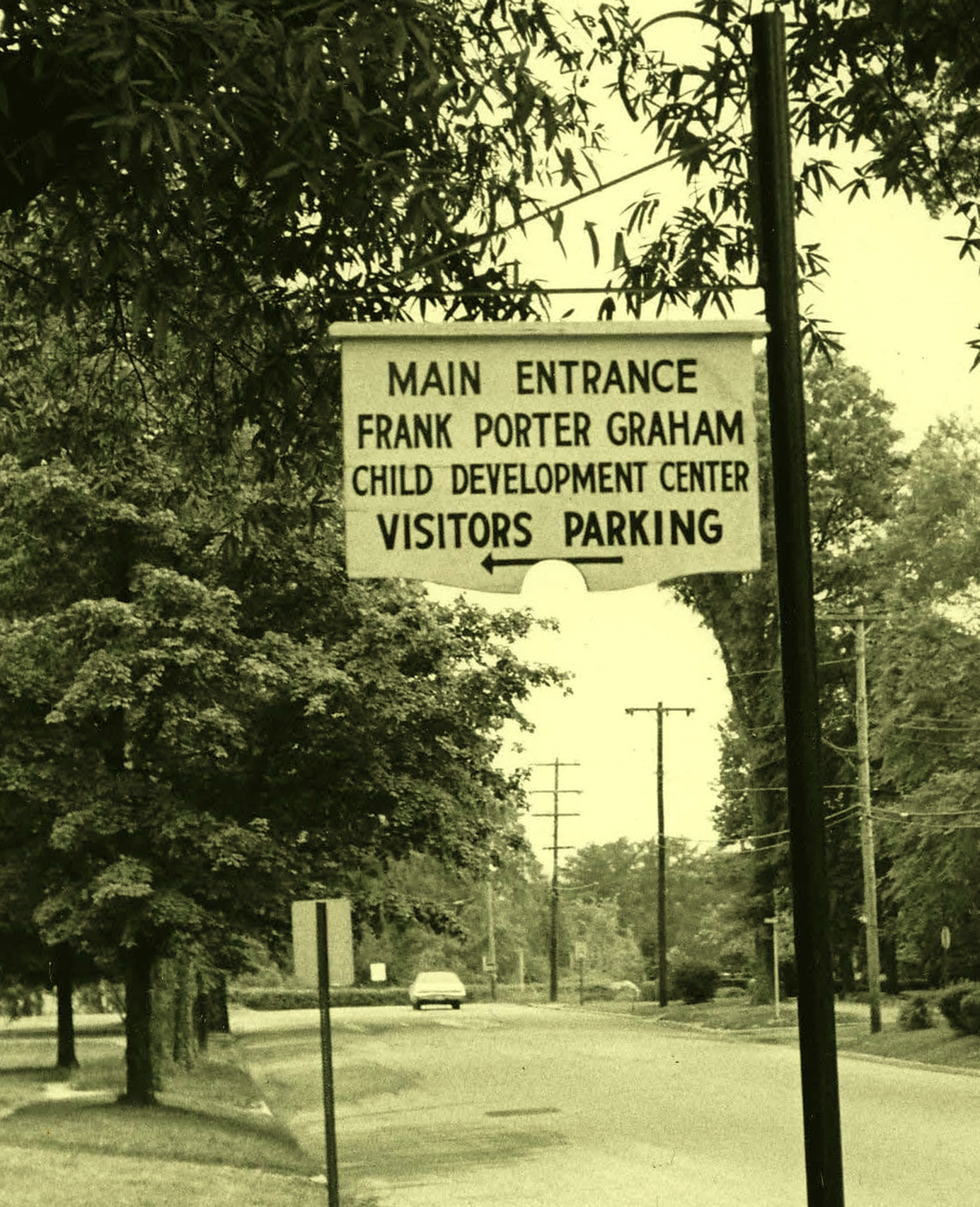 Despite the dean’s alarmist arguments about the imminent collapse of the medical school if the cap did not remain in place, Graham ordered him to admit a qualified student who would make the fifth Jewish student in the incoming class. The dean resigned, but of course the Medical School flourished.

Newspaper reports said early plans for FPG included making temporary use of a local Presbyterian church’s facilities for the first group of children. Shortly afterward, three trailers on Cameron Avenue in Chapel Hill provided classroom space for 11 children and five staff, with the Robinsons’ own daughter, Beth, the first enrollee at FPG. According to Nancy Robinson, the center typically brought in children at a very early age, from the time their mothers had returned to work after giving birth.

FPG also offered nothing short of a radical child care setting for the South of the 1960s. “It involved black and white children together,” she said. “This was revolutionary in those days and times.”

Named, funded, and with key political support from UNC System president William Friday and other university heavyweights, the fledgling center began what would become a half-century of research, technical assistance, professional development, and other forms of public service. FPG’s influence would spread across many professional and disciplinary spheres, and by the time the original little center would celebrate its golden anniversary

as a booming institute, people in 180 countries would use its resources, and children from its very first major project, the Abecedarian Project, would still be making news.

As difficult, exciting, and complicated as it would prove to be, FPG had embarked on its mission to fulfill the promise of the premise that it was possible to affect the trajectories of lives by steering them onto better courses early—and that doing so, in turn, could begin to alleviate broader social and economic challenges.

The Promise of the Premise.pdf