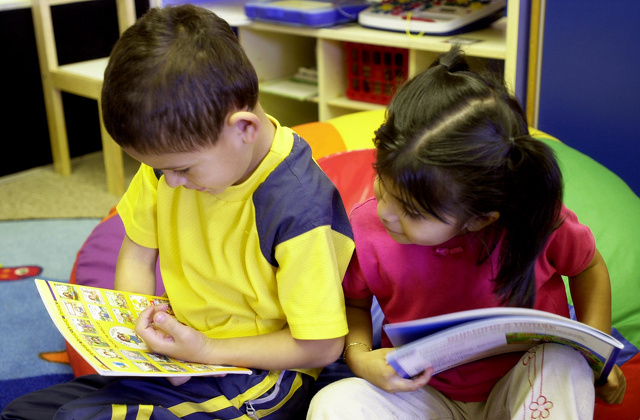 Students who were enrolled in the NC Pre-K Program are making significant gains across all areas of learning through the end of kindergarten, according to a new report from scientists at UNC’s Frank Porter Graham Child Development Institute (FPG).

“Students made progress on most skills through kindergarten at an even greater rate than would be expected for normal developmental growth,” said Ellen Peisner-Feinberg, director of FPG’s National Pre-K and Early Learning Evaluation Center. Peisner-Feinberg pointed to significant gains throughout this period in students’ language and literacy skills, math skills, general knowledge, and behavior.

“Although children made gains over the entire period from the beginning of pre-k through the end of kindergarten, there were differences in the amount of gains each year,” she said. “In pre-k, for instance, there was a relatively greater rate of growth on some measures of language and literacy skills, as well as on basic self-knowledge and social skills.”

Peisner-Feinberg leads the FPG team that has studied the NC Pre-K Program and provided it with recommendations for more than a dozen years. Since the statewide program’s inception as “More at Four” in 2001, it has served over 292,000 at-risk 4-year-olds, helping to prepare them for kindergarten.

Throughout this time, FPG researchers have provided annual evaluation studies of NC Pre-K’s outcomes. Peisner-Feinberg’s new end-of-kindergarten findings dovetail with her prior research in North Carolina, which also suggests that children enrolled in the state’s pre-k program continue to make gains even after leaving it.

Prior evaluations of NC Pre-K also revealed that children with lower levels of English proficiency made greater gains than their peers while in the program. Peisner-Feinberg’s new findings show that this continues to hold true through their first year of elementary school.

“In most areas of language and literacy skills, math skills, and general knowledge, children with lower levels of English proficiency make the greatest gains through kindergarten,” she said.

In 2013–2014, the NC Pre-K Program served almost 30,000 children in nearly 2,000 classrooms, yet still maintained an average class size of only 16 children. According to Peisner-Feinberg, the majority of the NC Pre-K sites achieved the highest five-star licensing level.

She also explained that an important and continuing trend in the NC Pre-K Program has been a steady improvement in the levels of teacher education and credentials. More teachers in the program than ever before hold B-K (birth-kindergarten) licenses, bachelors degrees, or higher degrees.

“Classroom practices were of higher quality when teachers had B-K licenses,” she added.

Peisner-Feinberg said FPG’s history of bringing researched-based recommendations to NC Pre-K has helped the program maintain its quality as it has grown.

“The state has examined the evaluation findings to ensure that all children are benefitting from NC Pre-K and to consider areas where they might improve practices,” she said. “It’s been very positive from our perspective to see the program make such good use of our research.”

The NC Department of Health and Human Services houses the Division of Child Development and Early Education (DCDEE) and reports the results of FPG’s evaluations to the state legislature each year.

“It is certainly affirming that this research validates that our investments in NC Pre-K continue to result in significant positive educational outcomes and are making a difference for North Carolina’s young children,” said DCDEE director Rob Kindsvatter.