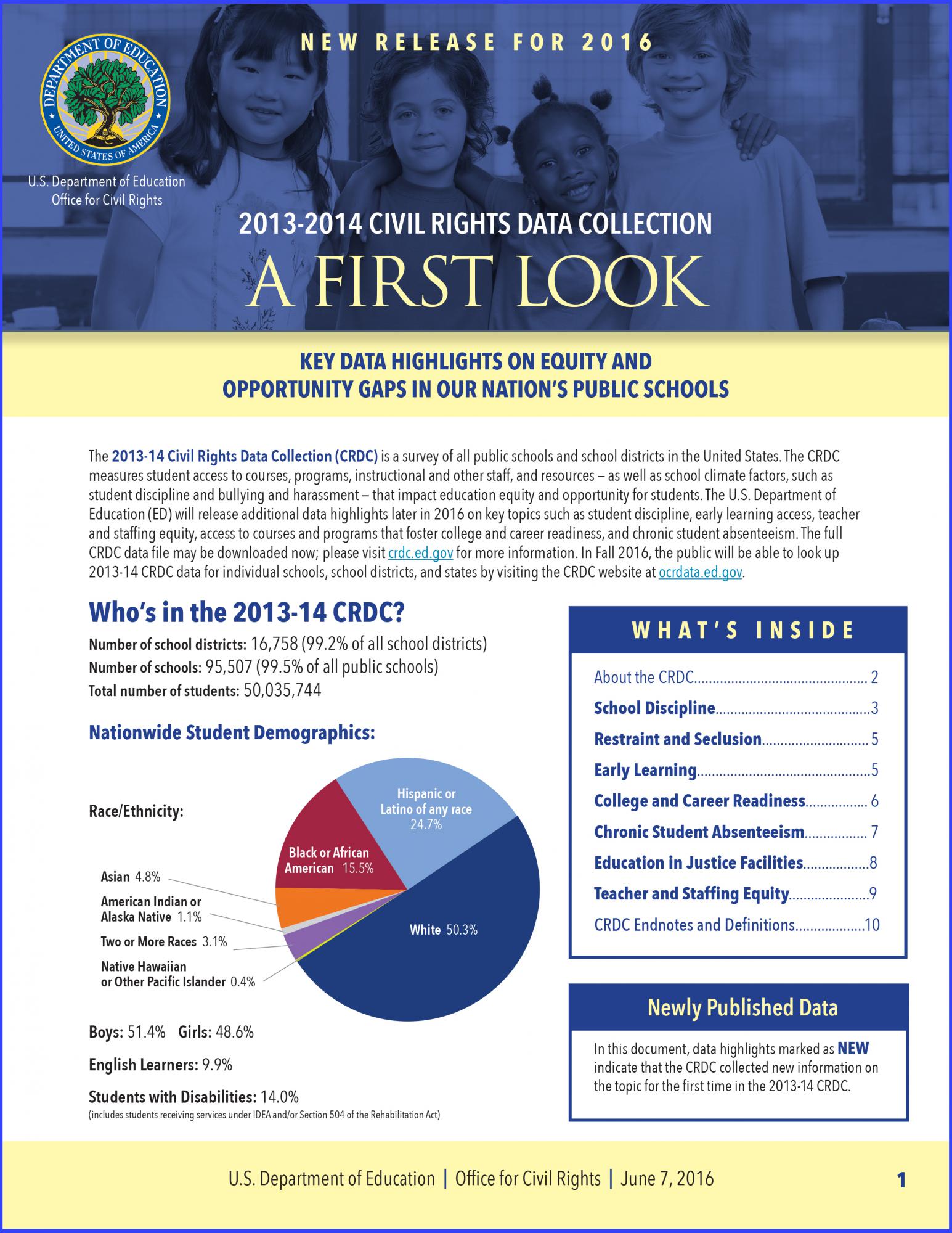 Read the U.S. Department of Education’s
“Key Data Highlights on Equity and Opportunity Gaps in our Nation’s Public Schools”

The U.S. Department of Education’s Office for Civil Rights (OCR) has released a data-based report highlighting inequity in public schools across the nation. U.S. Secretary of Education John B. King Jr. said the data represented “more than numbers and charts—they illustrate in powerful and troubling ways disparities in opportunities and experiences that different groups of students have in our schools.”

Much of FPG’s work also has identified disparities and addressed some of the types of inequity the new report notes. What follows are key excerpts from the report and the OCR’s announcement with links to more information and FPG resources.

Black preschool children are 3.6 times as likely to be suspended as are white preschool students... Nationwide, 2.8 million K–12 students received one or more out-of-school suspensions… In general, students of color, English learners, and students with disabilities are, on average, disciplined more often than their classmates.

FPG’s National Early Childhood Inclusion Institute annually provides a premier educational opportunity for anyone involved in the care and education of young children in inclusive settings. This year, the three-day conference addressed suspensions and expulsions in early education settings with a special session, Preschool Inclusion: Building Competence and Confidence to Include Everyone and Exclude No One, which included several resources that are available here.

FPG associate director Desiree Murray and colleagues led another session at the Institute that explored how to support teachers with students whose behaviors may be challenging, Co-Regulation: An Evidence-Based Approach to Building Self-Regulation in Early Childhood, which included the presentation available here. Murray also has co-authored a series of reports on self-regulation skills, which are associated with children’s emotional, cognitive, and mental health outcomes. Many types of interventions can positively influence the development of self-regulation skills, in turn potentially alleviating opportunities for classroom conflict.

FPG’s Kate Gallagher also shed light on what’s happening inside some public schools with a study determining that in kindergarten and first grade classrooms teacher-student conflict increased both for boys and African American children as the school year progressed.

The “My Brother’s Keeper” Taskforce convened 40 school districts from across the nation to the White House to announce new commitments to encourage alternatives to suspension and expulsion.

An editorial team consisting of current and former FPG experts spearheaded a new issue of Social Policy Report, which takes an in-depth look at the developmental science involved in “My Brother’s Keeper.”

This report from the Connecticut Department of Education shows that school-aged students with autism spectrum disorder can face seclusion and restraint more than other groups. FPG's Center on Secondary Education for Students with Autism Spectrum Disorder (CSESA) has compiled a pioneering curriculum designed to support teachers who have students with autism who present challenging behaviors.

With regard to young children: research has long shown the benefits of including children with and without disabilities together in early learning settings due to the benefits for both groups. In 2015, FPG’s National Early Childhood Inclusion Institute was the site of the debut of a new draft federal policy statement on inclusion. Although the new federal policy focuses on inclusion of young children, one of its operating principles is that inclusion is essential across the lifespan.

FPG’s Early Childhood Technical Assistance Center also has provided a popular webinar series on inclusion, which, along with accompanying resources, you can access here.

(More FPG research and resources on inclusion are available here.)

FPG’s Kirsten Kainz and Yi Pan’s research determined that African-American students in first grade experience smaller gains in reading when they attend segregated schools—but the students’ backgrounds likely are not the cause. Their research implies that differences aside from the student body are hindering academic gains in segregated schools; such differences could include the number of novice teachers.

Although the report cites data here that include school-aged children, new research from FPG’s Margaret Burchinal and colleagues looked at early learning experiences and found evidence that absenteeism matters: children showed larger gains when they attended more than one year of Head Start, had fewer absences, and spent more time in reading and math instruction. (Burchinal's team also uncovered evidence that a threshold of instructional quality is essential for academic gains in preschool settings.)

Schools are required under federal law to provide special education and related services for preschool-age children with disabilities. But more than half of school districts are offering preschool above and beyond what is required. More than 85 percent of those school districts are providing those services at no cost to families. Unfortunately, the remaining school districts are charging families to attend, which is a burden to low-and middle-income families.

FPG’s Early Childhood Technical Assistance Center improves state early intervention and early childhood special education service systems, increases the implementation of effective practices, and enhances the outcomes of these programs for young children and their families. It houses a treasure trove of resources.

For 50 years, FPG also has addressed disparities through a wide variety of projects that identify and/or alleviate inequities. Since the 1970s, FPG’s Abecedarian Project has become synonymous with positive, long-term effects of high-quality early care and education, particularly with regard to the power of early education to surmount some of the disadvantages of poverty.

Recently, 200 respected researchers, policymakers, and practitioners participated in FPG's 50th anniversary conference to envision and enable better outcomes for young children and their families, which included a special panel on Race, Ethnicity, Linguistic, and Cultural Diversity. The conference also included seminal panel discussions on Children with Disabilities and Their Families and Early Care and Education.

In addition, FPG’s FirstSchool focuses on improving pre-k through 3rd-grade school experiences for African American and Latino children and their families, addressing challenges to producing equitable educational outcomes across demographic groups. FPG’s From Evaluation to Inquiry provides educators in struggling schools with lenses through which to view the experiences of African American, Latino, and low-income students and to make informed decisions about how to improve their school experiences.

FPG also has launched a new comprehensive study of early learning in rural North Carolina, which continues FPG's long tradition of studying educational opportunities for minority populations in rural areas through such notable initiatives as the Family Life Project.

A number of other FPG projects address disparities and inequities in children's learning by generating knowledge for the field and/or applying research-based solutions to real-world situations.

Read "Development of lnfants and Toddlers Who Are Dual Language Learners"

Read "The Cognitive Development of Young Dual Language Learners: A Critical Review of the Research"

Find more related projects and resources that focus in part or entirely on immigrant populations in "Understanding the 21st-Century Melting Pot" on p.16 in this issue of Early Developments on FPG's International Initiative