A Single Year of High-Quality Early Education Has Broad Effects 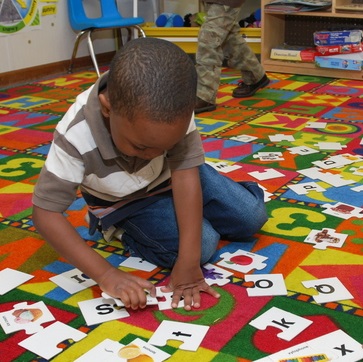 New research from UNC’s Frank Porter Graham Child Development Institute (FPG) reveals that one year of high-quality early education and care brings multiple benefits for children in poverty. Not only do language skills improve, but children also have more positive interactions with their parents and display fewer problem behaviors.

“The achievement gap for children from low-income families has been an enduring problem, but relatively few programs have been successful in narrowing that gap,” said Noreen M. Yazejian, FPG senior research scientist and the study’s principal investigator. “These findings suggest that a comprehensive, research-based early childhood education program can make a difference for children even after just one year.”

Yazejian led a randomized study of 239 infants and toddlers in Educare schools in Chicago, Milwaukee, Omaha, and Tulsa, comparing children who were assigned to attend Educare to those who were not. Educare is an enhanced Early Head Start and Head Start program for children from low-income families. It includes children from 6 weeks old until entry into kindergarten.

“We found that children in Educare schools had significantly greater auditory and expressive language skills,” said Yazejian. “The size of Educare’s effect on language was greater than effects reported for other early interventions.”

Previous research has shown that language skills are most malleable for children before age 4, which in large part explains high-quality early education’s potential power. Early language skills are a precursor to emergent literacy skills and are strongly related to later language, reading, and school achievement.

“FPG’s Abecedarian Project demonstrated that early language development almost entirely accounts for differences in child outcomes after preschool,” said FPG senior research scientist Donna Bryant, the Educare study’s co-principal investigator. “All children entered the new Educare study before age 19 months, with both the Educare and control groups scoring near national average on a language measure at study entry. Whereas Educare children maintained their developmental level over the course of a year, children in the control group decreased relative to national norms.”

Yazejian said Educare’s positive effect on problem behaviors is also a key finding, because prior studies have shown that the same behavior regulation skills promoted by Educare are linked with school success.

“Many researchers view social-emotional and academic skills as interconnected,” she said. “Children with problem behaviors may frustrate teachers, and teachers may provide such children with less positive feedback and instruction.”

The study also found a positive effect on sensitive and responsive parent-child interactions. Yazejian and Bryant attribute this to the family support and opportunities for parent engagement that Educare schools provide.

Previous studies have shown that early parent-child relationships are important because they predict social and academic outcomes in the elementary school years, through middle grades, and even in high school.

“We know that healthy development in the first years of a child’s life is essential, and this study shows that a high-quality, comprehensive early learning program like Educare has the potential to improve the outcomes of low-income infants and toddlers,” said Diana Rauner, president of the Ounce of Prevention Fund, also a leading partner of Educare.

Findings from the new Educare study add to a growing body of research revealing better outcomes for children from low-income families who receive high-quality early education, including prior research on Educare. In 2015, Yazejian’s study of children across all 21 Educare schools revealed that both an earlier age of entry and a longer duration of care boosted language skills.

“Now,” she said, “our new findings suggest that even a single year of high-quality care can improve outcomes in multiple areas.”